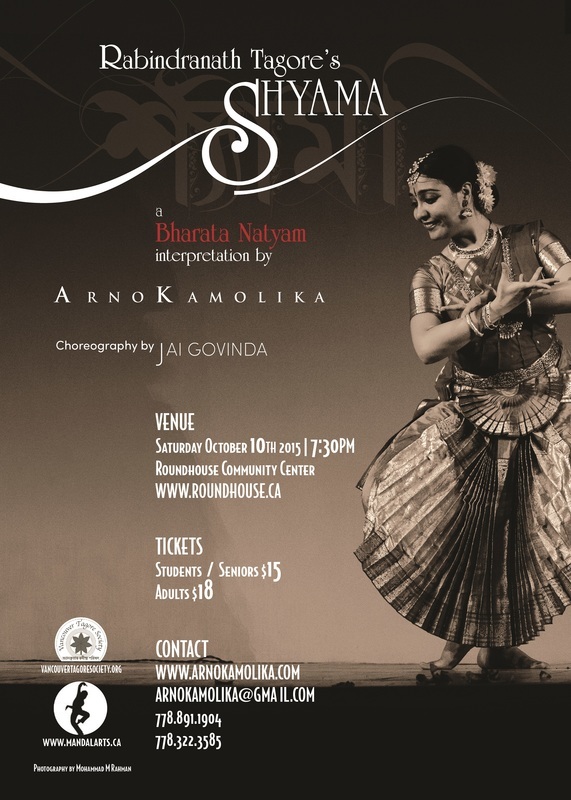 Vancouver Tagore Society, in partnership with Mandala Arts & Culture Society, presents a Bharata-Natyam interpretation of Rabindranath Tagore’s epic dance drama ‘Shyama’. Choreographed by Jai Govinda, the artistic director of Mandala Arts and Culture, and performed by his disciple Arno Kamolika.
All the songs of this production are sung by Shankhanaad Mallick and Suranjana Hoque.

Over the past few years, Arno Kamolika has been an integral part of Mandala Arts as a teacher and as a soloist performer.  Arno has been performing regularly in multicultural programs showcasing Bharatanatyam in and around Vancouver. Recently, she has performed at several events organised by Institute of Asian Research (UBC), Vancouver Tagore society, Consulate of India and Dancer Transition Resource Centre in Vancouver. She has received the “Distinguished Dancer Award 2012” from Writers International Network Canada, Vancouver for her contribution to the community as a dancer. Arno’s rich repertoires of performances have taken her across the globe at various festivals in USA, Germany, India and Bangladesh. In her new production Shyama, she is trying to create a bridge between the Indian classical dance form Bharatanatyam and Bengali literature of Nobel-laureate Rabindranath Tagore.

Jai Govinda, artistic director of Mandala Arts and Culture Society, is a recipient of the 2014 “Mayor’s Arts Awards-Honouree/Dance” and 2006 Dance Centre’s “Isadora Award.”

About the Production:
Rabindranath Tagore’s epic dance drama Shyama has been beautifully adapted and has been given an entirely new outlook by the dancer Arno Kamolika in her solo bharata-natyam production. Steering away from traditional repertoires of bharata-natyam, this experimental piece uses this renowned Indian classical dance form to express the story. Arno, through her expressive dancing and facial expressions, portrays all the characters of this play as a solo performer. The production is choreographed by Jai Govinda and original music is recorded at Chhayanaut Studio, Dhaka.

Synopsis:
This romantic tragedy of Tagore is based on around the story of Shyama, a powerful royal court dancer. Shyama falls in love with a foreign merchant Bojrosen, who is falsely imprisoned by royal guard Kotal. She travels great lengths to save her love from unjust execution. Uttiyo, a young admirer of Shyama who loves her silently from a distance, offers his own life to save Bojrosen. Shyama gives him the royal ring as a token of gratitude but fails to save him from king’s guard. Shyama frees Bojrosen from imprisonment and runs away with him to unknown lands, leaving all the comfort and prestige of the royal palace. But her love and her desire are thwarted when Bojrosen, a man of strict principle, is unable to appreciate what Shyama has done to save his life and is unable to show sympathy for her. He is torn between rejecting her as a sinful woman and accepting Shyama’s intense love for him- a love that made her forget the norms of ethics and morality.